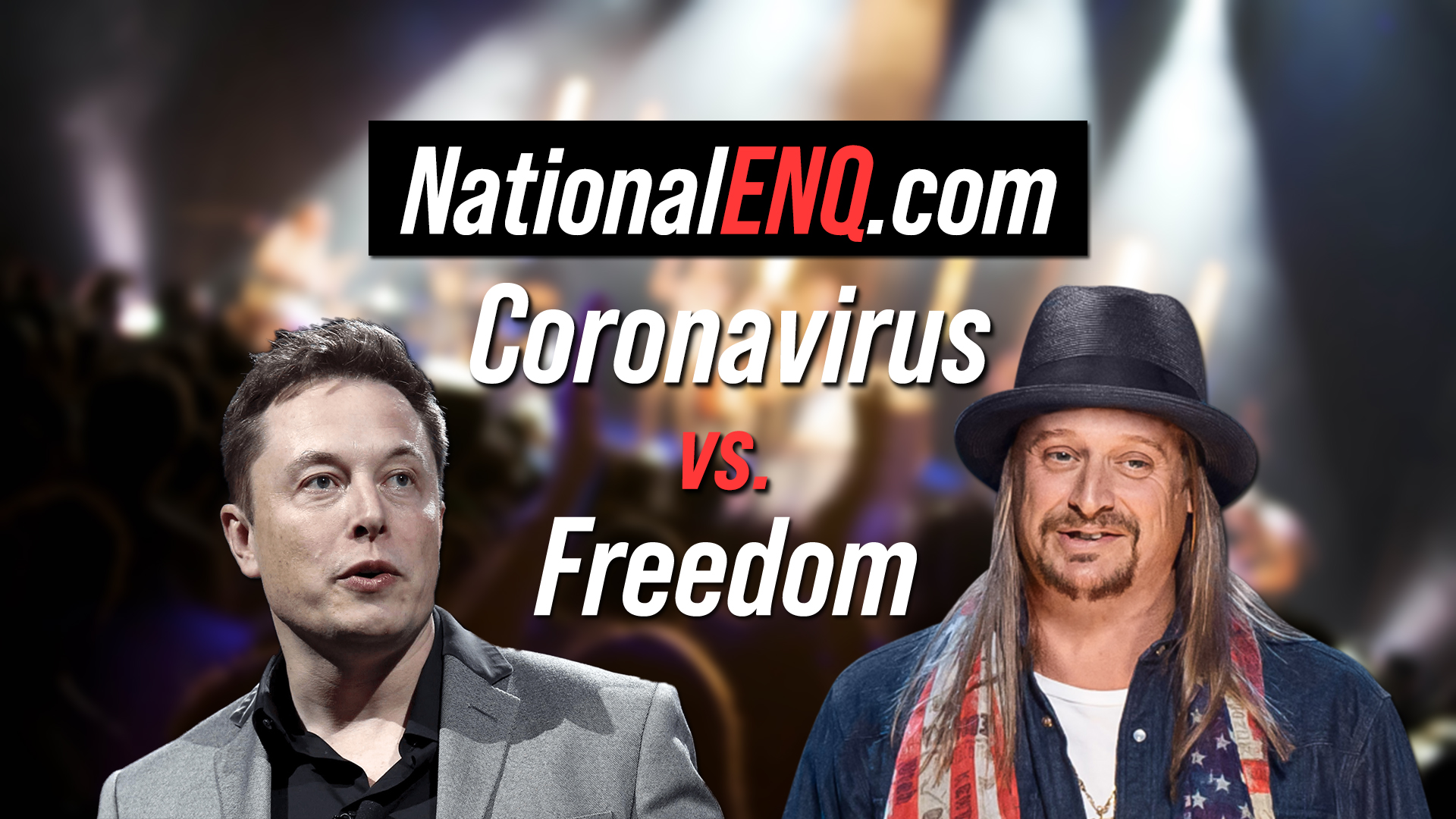 National ENQ Has Started to See More & More Celebrities, Entrepreneurs Who Want to Keep Their Business Open & Keep on Living as Usual, Despite Coronavirus Fears

As many others, Kid Rock is a celebrity and entrepreneur that stood out for wanting to keep his business, a bar and steakhouse in Nashville, Tennessee open, even though most business owners have been told to close down, and many have complied. Many people have agreed with Kid Rock’s decision, saying it’s anyone’s right to keep their business open or closed, regardless of what’s going on outside.

“We appreciate the efforts of Mayor Cooper to combat the COVID-19 virus, but unless there’s a statewide mandate that directs all bars and restaurants to be closed, the request made by Mayor Cooper is unconstitutional as he is targeting a select group of businesses.

We are compassionate with those who have contracted the COVID-19 coronavirus and all who are helping to manage the crisis as the entire world addresses the outbreak. However, a Tootsie’s patron as immediate as last night, mentioned having lived through the polio epidemic and didn’t recall such extreme measures being handed down in history.

In response, Tootsies Orchid Lounge, Rippy’s, Honky Tonk Central, Kid Rock’s Big Ass Honky Tonk & Steakhouse and The Diner will continue to remain open to serve the public until such statewide mandate is issued from the Governor of Tennessee.”

Quarantine – For Many, The Modern-Day House Arrest

Whatever the opinion of the local or central Government may be, it’s heavily debated that they shouldn’t be able to close down any type of business or initiate lockdowns, whatever the case may be. These so-called “lockdowns”, are believed to be a quite manipulative term, inducing closure for many businesses around cities and, as a result, keeping citizens at home against their will, much like a house arrest.

People Want to Keep on Livin’

National ENQ sees more and more celebrities and entrepreneurs, just like Kid Rock, that stand for the fact that people are free do anything, even in periods of distress. Although not encouraged and actually dismissed by governments, local and national authorities, it’s debated if people should KEEP ON LIVING, regardless of what the concerns are outside, or be stuck in their homes to minimize the spread of the coronavirus (COVID-19).

Many people think that the authorities should only warn citizens about the potential risks of going outside, amidst the coronavirus (COVID-19) outbreak – it’s heavily disapproved by many people, including entrepreneurs and celebrities to keep the population at home, under a form of house arrest, isolation or quarantine, directly by force or law, or indirectly, by closing down businesses and banning gatherings and other places.

National Enquirer About Isolation & Its Impact on Businesses

National ENQ debates – if people take the proper safety precautions (or not), should the entrepreneur, along with their business suffer because of the Government or authorities keeping their customers locked at home or, even worse, closing businesses down?

Many, just like Kid Rock, believe that if the people want to go out and spend their time in public places or businesses, they have the right to do so, and that their rights shouldn’t even be put in question. Many entrepreneurs and businesses stand with these facts, stating that if they want to keep their business running to serve customers and generate profit, it’s their right to do so.

At the same time, there are many people who believe “quarantine” or “self-isolation” is good for themselves and others, with many going out of their way to propose lockdowns and laws to keep people in their homes, along with many businesses and entrepreneurs who have chosen to close their activities until the situation gets better.

The Government’s Job During the Coronavirus (COVID-19) Outbreak

Although there is heavy debate about isolation versus doing the same activities as before, in order to “keep on living”, most believe that the Government, along with all authorities, at local or national level, should look out for their citizens and businesses, and do the best job possible to warn them of the potential dangers of being in public or crowded places, as well as keep their hospitals and facilities up and running better than ever, in order to stop the spread of the coronavirus (COVID-19), as it is their job to protect and warn its citizens.

As many entrepreneurs support the idea that there shouldn’t be measures taken against their businesses in order to close them down, with his recent tweet, Elon Musk seems to imply that the coronavirus (COVID-19) panic shouldn’t be affecting us and our businesses like it’s portrayed to.

National ENQ debate: The Risk of Catching Coronavirus – Similar to Smoking, Drinking or Even the Flu? The Freedom of Choice Discussed

The risk of catching the coronavirus (COVID-19) has been inducing panic throughout the population, with many staying home considered to be protecting themselves, while others haven’t changed their activity much – compared to much underestimated risks of smoking, drinking or catching the flu and other diseases, the safety measures and precautions taken by a part of the population has been seen as outlandish to some, who have realized everyone has already been exposed to greater risks brought with cigarette smoking, alcohol consumption or risking to catch the flu or other diseases everywhere you go, with most taking no measures before, at all.

There is an ongoing debate about self-isolation and lockdowns, but many people think that the risks have always been there – and they will always have the freedom of choice when doing anything, like going outside or keeping their business running.